Me in numbers is a project my class and I did here we learned that numbers are everywhere for example mountains< beaches and Harry Potter < Disney and more. 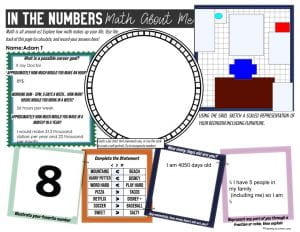 Clouds blocked the sunshine on the day a girl named Karen Smith went to the supermarket on Potatoes street and bought some bread. On the way back she saw a filthy alley with a strange old man. The strange old man offered her a bag for her bread and persuaded her by saying, “If you cut the thing in the bag it will turn into something delicious that will stay forever but don’t open the bag until tomorrow or nothing will be in it”. Karen accepted the trade. The minute Karen left the strange old man whispered, “ But there is a twist the thing in the bag does not like being cut he will start to glow.” Karen then left the alley before he said the warning.

As she walked away she thought, she thought to herself “what kind of food is it and what is in the bag? “

Approaching her house, Karen couldn’t shake the feeling from the old man.  She went to the kitchen, took the bag, opened it and found a pumpkin, got a plate, and took a knife. She sat up the table, put the pumpkin on a cutting board. She was about to cut but then… IT STARTED GOING BRIGHT! SHE KEPT MOVING THE KNIFE CLOSER AND CLOSER BUT THE FURTHER THE KNIFE WENT THE MORE

Karen slowly backed away from the pumpkin surprised “the strange old man never said anything about it glowing” said Karen. She tried again. This time THE KNIFE BROKE! Karen did not understand what was going on…

She rushed back into the filthy alley and she asked the old man “ Why did my knife break while I was trying to cut it and why did it randomly start to glow?”

The old man answered, “To cut it you need to use a Walmart 100$ knife after all it is saving some money compared to what happens when you cut the pumpkin.”

Karen then rushed to Walmart. She went to the utensils section and found the knife, but there was somebody else running towards it! KAREN RAN THE FASTEST SHE COULD BUT THE OTHER PERSON WAS GOING JUST AS FAST but in the end, Karen got the knife. She went so fast all you could see was a blur while she was running to her house. She ran to the kitchen and took the knife but when she cut the pumpkin and…

She went back to the Alleyway and asked the strange man, “When I cut the pumpkin nothing happened! What’s going on?”

“What do you mean? The man said, “I was talking to my cousin but he was behind you”.

Karen asked the man, “Who was that the other person who was trying to get the knife?”

I slowly walked along the snowy streets. The traffic lights blinked like they had sand in their eyes. I felt freezing cold and I thought for sure I would get frostbite. It was so cold, I almost mistook squirrels for penguins! I saw lots of lamp posts and cars going zooooooooom. There was a tiny raccoon poking its head from the alleyway. The smell of garbage in the alleyway was as stinky as bull poop!